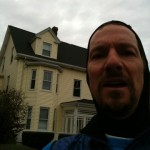 I woke up Sunday morning excited to run around my sister’s neighborhood. I did an abbreviated version of my morning routine, then stuck my head outside to get an idea of the temp. SHOCKER! It was flippin’ cold! I put on every piece of running clothing I brought and went anyway.

I ran along Mass Ave until I came upon the bike path and thought this looks quite nice, so I veered left and continued on. The nicest part of the path was the first few minutes! As you can see from the picture it started off very nicely. It then weaved around a football field and under an overpass, by a parking structure… You get the picture. 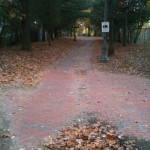 The run was fairly short, 34 mins, and cold, 30°F, but I was happy to have another run in me, since next month I’ll be running regularly with Rod – the world’s strongest man.